2019 is the 50th anniversary of the moon landing, and to celebrate this amazing collective achievement, Sydney Festival 2019 pays homage to all of the unsung heroes of space exploration. For those of us not brave enough to sign our lives away to the Mars 1 project, there are several space-themed works to satisfy your lunar curiosity starting with an Apollo 11-inspired set of artworks at Barangaroo (just look for a larger-than-life chap sporting an orange spacesuit).

If you’ve ever wanted to defy gravity, you can at Darling Harbour’s Moon Drops.

Described by festival organisers as ‘like a supersized waterbed or a lunar trampoline’, it allows you to experience weightlessness while bouncing around on water-filled moon drops. For the more energetic, ‘Fly me to the Moon’ provides an opportunity to clock up some miles on the Lunar Velocipede, an interactive installation in the form of a space bike you can actually ride, at World Square.

The Sydney Festival is a great way to celebrate the weird and wonderful of Sydney’s arts scene. If you’re planning to give your post-Christmas maxed-out credit card a break, don’t despair; the Sydney festival 2019 program includes plenty of free events, most of which are available throughout the whole festival (9-27 Jan), and feature local, indigenous and overseas artists. As usual, we’ve scoped out the program early, so we can present our list of ‘must-sees’. Read on to see what we’ll be attending this January.

The Sydney Festival 2019 is a great opportunity to learn more about Australia’s indigenous heritage. Probably the highlight on this year’s indigenous calendar is the overnight vigil at Barangaroo Reserve. The vigil starts at dusk on the 25th January for the lighting of the ceremonial fire and will be followed by musical performances and stories of Country from elders while reflecting on the impact of colonization.

While you’re at Barangaroo, check out ALWAYS, the outdoor sculpture by local Bangarra artist in residence Jacob Nash. Don’t forget to book yourself in for some free native language courses at Bayala (UTS and Parramatta) prior to the event so you can join in the singing on the night.

At Sydney Urban Adventures, we love a good crime story, especially if it involves colourful Kings Cross underworld figures. So Zanny Begg’s Beehive is definitely on our list of ‘must-sees’.

Beehive can best be described as a hybrid video art/documentary project that explores the mysterious 1975 disappearance of Juanita Nielsen, a wealthy heiress and grassroots activist fighting the irresistible force of urban development ushered into the Cross by a sinister conglomeration of crooked cops and gangs of hired thugs. The work is a sequence of around 20 video clips arranged randomly and features old news footage of a motley assortment of gangsters, strippers, and café owners, as well as a cast of 12 actors representing Nielsen herself, all sporting her trademark beehive hairdo. 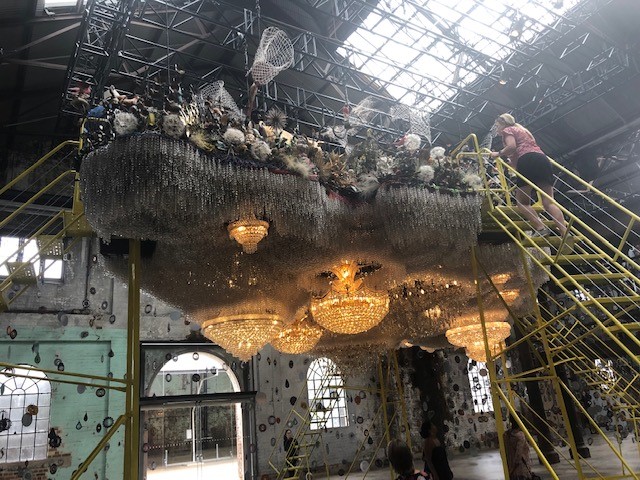 One of the more bizarre artworks displayed at this year’s Sydney Festival is ‘Until’. The centrepiece of the exhibition is a giant cloudscape made from an assortment of shimmering crystals that mask a darker array of objects, some of which are a direct reference to America’s racist past. Viewed from below, the work resembles an elaborate chandelier, but from the top (visible only by climbing a ladder), the viewer is greeted by a bizarre collection of household objects from America’s pop culture past.

The work, which takes its name from the phrase ‘Innocent until proven guilty’ explores themes such as race relations, gender politics and gun violence in America. It also provides the basis for a community forum that aims to change the way we view these issues.

Of course, there’s a bunch of other things to see at this year’s Sydney Festival if you have a few more dollars to spare; the disco-burlesque-cabaret Pigalle, and Shanghai Mimi, and acrobatic show set in 1930’s Shanghai both come to mind.

But if it’s cheap and cheerful you’re after, this year’s Sydney Festival is promising some real treats.