The Vegan’s Guide to Eating in Sydney 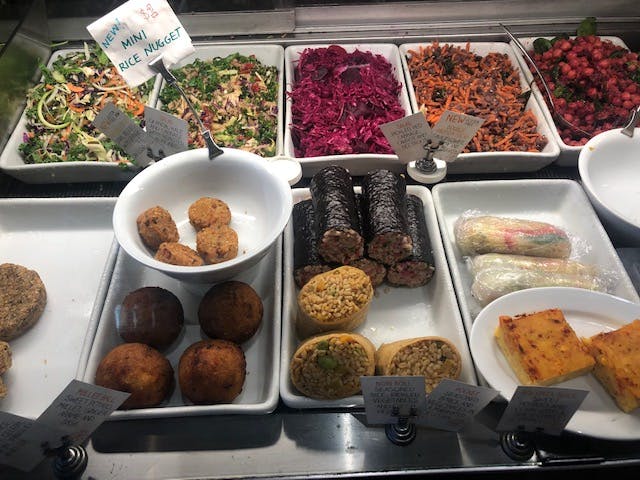 Aussies may be very keen on their barbecue, but veganism is catching on pretty quickly around here. The classic beef burger is getting a good run for its money from some pretty tasty plant-based option and companies like Over the Moo have provided us with enough dairy-free salted caramel desserts, who needs the milk-based ones any more? So whether you’re passionate about giving our four-legged friends a better deal, trying to improve your health, or just a lover of great food, Sydney has plenty of vegan delights on offer. Follow this guide, grab your mates, and make a night of it.

Our Favourite Vegan Restaurants (in no particular order)

Bodhi, Lower mezzanine lvl, Cook and Philip Park, 2 College Street: Who knew vegan dining would extend to Yum Cha? At Bodhi, you won’t see chicken’s feet, but you will get a range of plant-based treats including minced mushroom and pea steamed buns, and the usual Chinese greens with soy rather than oyster sauce. And you can eat it all under the shade of a giant fig tree.A typical yum cha breakfast will set you back around $25 per person.

The Little Turtle Plant-Based Thai (10-14 Stanmore Road, Enmore) It’s Thai and it’s vegan. Need we say more? This restaurant in which superb Thai food is served within a vintage industrial interior by friendly waitresses who never seem to baulk at even the most demanding customers is the talk of the town. Even the most hardened carnivore has been known to chow down on its salt and pepper tofu and masaman potatoes. Mains range from $20 to $30.

Alibi, 6 Cowper Street Wharf, Woolloomolloo: Oh so cool Alibi restaurant describes itself as ‘the kind of place you always hoped for, but never dreamed you’d find’. The brainchild of Matthew Kenny, one of the world’s most renowned plant-based chefs, Alibi is a must-visit when in town. It also has a bar with some damn fine cocktails, and even a high tea (I’m assuming that’s not cream on those scones). Alibi’s prices are surprisingly reasonable, with mains hovering around the $27 mark.

Lentil As Anything, 391 King Street, Newtown: Lentil As Anything is right in the heart of Newtown, Sydney’s most bohemian suburb. After opening in 2014, it became a vegan institution in Sydney. Its menu changes daily, and is based on seasonal, local produce. OK, so it’s not as fancy as Alibi, and it could probably pass as the Hare Krishna’s Sydney headquarters, but there’s always a colourful crowd, and, if you go at the right time, some entertainment as well. The restaurant has no price points, and patrons are encouraged to contribute what they like. Lentil is staffed by volunteers looking to learn new skills, and is known as one of the most responsible businesses in the community. 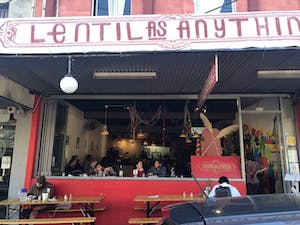 Gathered Kitchen, 99 Glebe Point Road, Glebe: Tired of second-rate brunch alternatives from regular cafes? Gathered Kitchen has you covered with a range of dishes designed to satisfy your cravings for pancakes and even croissants. If savoury is your thing, try a walnut mince tortilla as a lunch or brunch item. Set aside between $15-$20 for a meal with coffee.

Need Something Quick and Easy? Try these Takeaway Options…..

Soul Burger (King Street, Newtown and Glebe Point Road, Glebe, 316 Church Street, Parramatta)  Soul Burger may be home to the ‘plant-based disgrace vegan freakshake burger’, a hipster burger parody, but it has a lot more on offer as well. In fact every type of burger you can imagine is available here but with a plant-based alternative. It pioneered the beyond burger, still one of its signature items, and a great go-to. The chips are awesome too. Takeaway averages about $15. 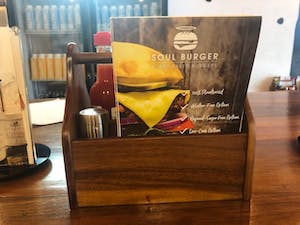 Gigi Pizzeria (379 King street, Newtown) What’s this? I hear you say, a pizza with NO animal products on it? Gigi’s actually does a great job of producing a pizza with absolutely zero cheese. Think pureed pumpkin base infused with olive oil roasted capsicum and garlic cooked in a hot wood-fired oven. It’s every bit as good as it sounds.

Lord of the Fries (537 George St.) What began as a mobile chipper in Melbourne in 2004 has become Australia’s one stop shop for vegan fast food. Lord of the Fries has pretty much all the burgers covered with plant-based alternatives to your one-time favourite beef, fish and chicken schnitzel burgers. Oh, and the fries are out-of-this-world. A takeaway meal including fries will set you back about$15

Mother Chu’s Vegetarian Kitchen, 367 Pitt Street, Asian takeaway is an institution in Sydney, so it would be negligent of us not to include at least one Asian veggo place in the mix. Although it’s nothing special from the outside, Mother Chu’s has developed something like a cult following among Sydney Vegans for its home-style cooking and Chinese/Taiwanese favourites with a twist, as well as its no-fuss décor.  Mother Chu is a Taiwanese Buddhist, and if you go in there, it’s more than likely, you’ll meet the lady herself, as she’s nearly always sitting at the counter with a big smile.

Iku Wholefood, 273 George Street, Pitt Street Mall, First opened in 1985, Iku was one of the first vegan eateries in Sydney, and it’s still considered one of the best. Their philosophy is simple, to prepare food that is as close as possible to its natural state. If you drag yourself away from the vegan burgers and fries, this is the healthiest of the takeaway options. Average lunch price is about $13.

And we Do Vegan Food Trucks as Well…….

Vejoes,Vejoes is probably the only dedicated vegan food truck in Sydney. It serves up delicious haloumi burgers, black bean quesadilla, vegan ‘butter chicken’ curry on rice and grilled corn. It also parks outside Young Henry’s brewery on Sundays so at least you know where to find it.

Over the Moo, OK technically not a food truck because you can go to one to one of their 900 locations, BUT, it’s Australia’s first dairy-free ice cream van, and the desserts are delicious. I promise.

Agape Organic Food Truck, So not technically vegan, it has some great vegan options like vegan tacos and burgers.

I Should Be Souvlaki, Yep, it’s vegan Greek food. All the tasty things you associate with eatin’ Greek is now available without the animal. Plus the name play on the Kylie Minogue song is nothing short of GENIUS. You’ll find this one at any event with market stalls.

And for All those Other Handy Items….. 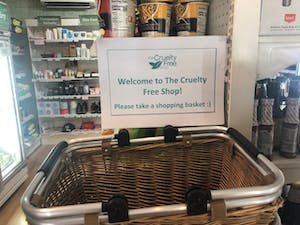 There’s the  Cruelty-Free Shop on Glebe Point Road, Glebe. Need to fill up on vegan travel snacks? The cruelty-free shop has a great range of plant-based dips, spreads and pates, along with vegan chocolate, chips and even whole frozen meals. You can also browse their range of toiletries, books, household products and clothes, basically everything the vegan traveler may need in one place.

On the third Sunday of each month, the Entertainment Quarter in Fox Studios, Moore Park hosts the Sydney Vegan Market. The event consists of over 100 food stalls including ‘I Should be Souvlaki’, a vegan Greek alternative, ‘Over the Moo’, a vegan ice cream truck, and various other culinary delights from around the world. There’s also a range of clothing, ceramics and beauty products, entertainment, yoga and as you would expect at any animal-loving event, the obligatory presence of large numbers of dogs. It’s a great day out with like-minded folk, and great for vegan-curious people who want to sample a range of products.

So now you can rest assured you won’t go hungry, hope to see you at one of these great venues soon.