So Which Pub is Sydney’s Oldest? 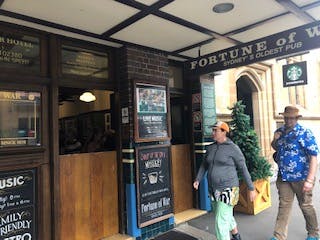 If you’ve ever been on our Sydney With Conviction or When Rum Ruled the Rocks tours, you’d know that we mention the Fortune of War is Sydney’s oldest pub. And certainly the publican likes to remind us of the fact every time we take somebody in there. But with the Rocks being such an old area, and with liquor licencing laws being what they were back in the early colonial days, it probably doesn’t surprise anybody that deciding the oldest pub in Sydney can be a rather contentious issue. The Lord Nelson, Australian Hotel, and Hero of Waterloo have all staked their claims on the title and for different reasons, so we thought it would be fun to examine each of the claims and see how they stack up. 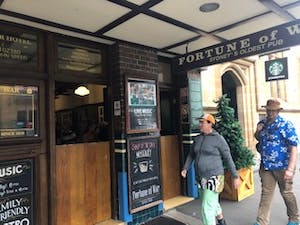 Well, it certainly claims to be Sydney’s oldest pub. It even says it right there on the sign outside the window. And it claims to have been trading since 1828, which is interesting seeing as licencing laws didn’t exist in Sydney until 1830, so these guys were either trading illegally for two years or they were one of the few places that had a kind of ‘at the Governor’s discretion’ permission to trade. Fortunately, the owner, who has done his research and has the framed pictures on the wall to prove it, can verify it’s the latter, so OK, no argument there. But then there’s the issue of the building – rather art deco looking for something for a place supposedly around since 1828. Again the pictures on the wall provide proof that while it’s not the original building – the old Georgian-style terrace house that once housed the pub was burned down and re-built in 1922 – it is definitely on the same site. Pretty strong claim, even if the building isn’t the original. 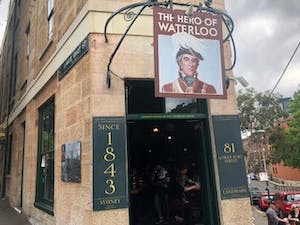 Nestled in the backstreets of the Rocks, this long-time favourite with locals and tourists alike has a really interesting history and lots of stories to tell, but not sure as to its claims to being ‘Sydney’s oldest existing pub’. Are we to assume it’s the oldest in its original building? Not sure it can claim that though, as the Lord Nelson was actually built first.

But it’s stonework, sourced from the Argyle Cut and constructed by convicts with their distinctive convict markings on the bricks is certainly impressive, and it retains much of its original character. More impressive are some of the stories that are associated with it. The pub even has its own ghost tour, thanks to the presence of a ghost whom Kazuka Nelson, the current owner, claims can sometimes be heard playing the piano and moving furniture around at 3am.

Then there are the claims that this was the site where young man were Shanghaied  (forced into indentured service on a ship) after getting drunk at the Hero. Take a tour down into the cavernous basement and you can even see the old underground tunnel where this was said to taken place. Creepy. 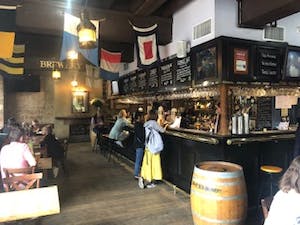 A serious contender for the title of Sydney’s oldest pub is the Lord Nelson. Like most pubs of the early colonial era, it was originally built as a house until it won right to sell alcohol, effectively turning it from a private house to a public house. This happened in 1841, so it just beats the Hero by a matter of months. The Fortune of War and the Lord Nelson have been the two establishments at the centre of this heated debate and it seems the Lord Nelson’s claim lies with the fact that, like the Hero, it is in its original convict brick building. It has the  honour of being called the ‘oldest working hotel in Sydney’ by Wikipedia, which, depending on who you ask, could be a dubious claim. But, on the plus side it serves up a nice home brew called Nelson’s Blood, a kind of spicy, smoky, dark chocolaty concoction, and it deserves a special mention for surviving the plague that swept its neighbourhood in 1900. Like so many Australians from the early colonial era, this hotel is definitely a survivor. 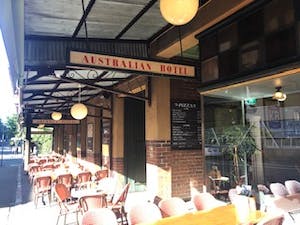 One hotel that didn’t survive the Bubonic Plague outbreak was the Australian Hotel. Apparently there has been AN Australian Hotel in the Rocks since the 1820’s, but exactly where and for how long is uncertain, as the hotel had to undergo a relocation during the 1880’s, followed by a rebuild after the plague in 1900. Unfortunately for the Australian, it cannot claim continuous licencing or premises, which pretty much takes it out of the running. Only the name has been around since the early days.

That said, the pub’s interior is a testimony to the old days with its quirky collections of Australiana and old beer posters. And it offers something the others don’t – pizza toppings featuring kangaroo, emu, and crocodile – a must-try for tourists on an olde worlde pub hop. The house brew is another draw card. Sourced from a specialist craft brewery in rural Picton, it’s a change from the usual trendy Sydney craft brews that are in most of the surrounding bars. A very Australian hotel indeed.

So what’s the verdict? I have to say, the real competition is between the Lord Nelson and the Fortune of War, with the Fortune having the oldest continuous licence and the Lord being in the oldest continuous premises (just beating the Hero by a hair’s breadth). But I feel the real winner is the Rocks for having such a great selection of pubs for locals and visitors to while away a lazy Sunday afternoon. If you are at any of these places and  manage to meet any of the publicans, get them to tell you a story or two. Over a beer of course.